There is a passage in The Polish Boxer in which the narrator, a Guatemalan literature professor and writer named Eduardo Halfon, tells a musician he has just met about his take on revolutions. I am, he says, ‘fascinated by internal rather than external revolutions…how and why someone is pushed toward a revolution of the spirit, whether it be artistic or social or whatever, strikes me as a far more honest search than all of the spectacle that follows. Because everything after that…is pure spectacle. Everything. Painting a canvas? Spectacle. Writing a novel? Spectacle.’

The Polish Boxer traces the lines of internal revolutions and the journeys of mind and body that inspire, ferment, and resolve them. Part novel, part collection of linked stories, Halfon takes the reader from his homeland of Guatamala, through a Mark Twain conference in the US, and onto an impossible search in snowy Serbia. At its heart lies a game of hide-and-seek as to whether the narrator and author – each named Eduardo Halfon – are one and the same. There’s also a grandfather who claims the numbers tattooed on his forearm are to ensure he never forgets his telephone number, and a classical pianist who disappears in search of the gypsy music he loves. How do our origins shape who we are? And what about our desire to construct identities: the stories we tell that can become more real than the truth? The Polish Boxer plays an elaborate and enjoyable game with all these ideas and remains fun and readable throughout.

Jazz music suffuses the prose. Eduardo is a big fan of the improvisations of Thelonious Monk and the narration works hard to create an impression of improvisation. You can here echoes of other writers throughout, dropped in here and there like indiscernible illusions. A considerable amount of action takes place in dark jazz bars, where smoke billows and twists in the air and conversations are had over lots of drinks. In some ways, the book is best summed up by the image on the jacket: wispy white smoke drifting against a black background, like bones on an x-ray. Unpindownable. Transient. Enigmatic. Descriptions are thrown out then modulated, everything is fluid, seemingly spontaneous. The ‘molasses eyes’ that Eduardo observes in a student one page become something else upon further viewing: ‘the only thing molasses about them was a mistaken memory.’ 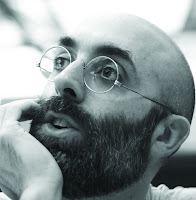 The Polish Boxer is a fun book to review. Halfon plays games with the reader, poses big questions about the relationship between fiction and reality, manages to be witty, profound, literarily aware, and accessible all at the same time, and then changes his mind on everything. I have a sense as I write that ‘there is something very important to be said about reality, that we have this something within reach, just there, so close, on the tip of our tongue, and that we mustn’t forget it. But always, without fail, we do.’

What’s more, its overall narrative is somewhat unreliable. This English translation takes a format that exists
nowhere else in the world. It is a combination of several works by Eduardo Halfon that are brought together into one new book; its plot and themes are therefore as much a creation of translation as of authorship. Indeed translation is the quiet miracle of this book: five translators worked together on bringing it to English, yet it doesn’t feel in the least disjointed. I am yet to encounter a reader who can discern a seam in the writing. And the translation is elegant as well as thought provoking, though one wonders why – despite four of the translators being English – they opted for Americanised spelling.

The Polish Boxer is a veritable feast of discussion points and thought provoking ideas, none answered, all which leave me with a smile on my face, feeling inspired and enthused. But then I love this sort of unspecific atmosphere. The Polish Boxer reminds me of Alexandar Hemon and Jonathan Safran Foer, not just in the experiences of immigration and journeys to eastern Europe, but in the mundanity of them, the drifting, the internal revolutions and the lack of focus. And like Everything is Illuminated, there is a sense that humour is used both as a way to effectively tell a sad story, and to shrink from truths too terrible to mention.

Dichotomies. Grey areas. Nothing is certain. Internal revolutions are quiet and frequently reversed. ‘There’s always more than one truth to everything’ says Halfon at one point. Or often, there is no truth at all. Merely memory and perspective. This is metafiction about the necessity of fiction to describe and interpret reality. But can we trust narratives? Can we trust stories? Can we trust literature? Halfon is drawn to the idea that stories are tools through which reality is made bearable and intelligible. Yet he is equally aware that this romantic notion is incomplete and that coherence and narrative are inventions of literature that have little in common with everyday life. ‘Literature is no more than a good trick a magician or a witch might perform, making reality appear whole, creating the illusion that reality is a single unified thing.’

The Polish Boxer is both self parody and a serious discussion of these issues. It begins in a classroom where students debate the merits of classic literature, particularly works where ‘nothing happens’ or the characters are dislikeable. Implicit comparisons are made with Mark Twain – that twisting, unpindownable clown -  and they are somehow worthwhile. I’m not sure how Halfon manages not to make all this sound incredibly pretentious. Perhaps it is because he is far more overt in his humour and one doesn’t fully believe he is serious about anything. This isn’t a J.M. Coetzee play on fiction and biography where the wit hides in between words. At times it drifts into being slightly too self-referential, and Eduardo’s girlfriend Lia – a scientist who draws graphs of her own orgasms – is one of the few dud notes of the novel.

However, overall, The Polish Boxer is a thrilling experience. If you like it, try The Theory of Clouds by Stephane Audeguy, for they share many similar themes. Just don’t take anything Halfon writes too seriously. Despite what the narrator argues in chapter one, there is no ‘correct way to read a story.’ However, his advice might be worth heeding in reading this book: ‘[let] yourself be dragged along in the author’s wake. It matters not whether the waters are calm or stormy. What counts is having the courage and confidence to dive in headfirst…A story is nothing but a lie. An illusion. And that illusion only works if we trust in it…Plato wrote that literature is a deceit in which he who deceives is more honest than he who does not deceive, and he who allows himself to be deceived is wiser than he who does not.’

Dive in! Enjoy the experience. The Polish Boxer is the first introduction English readers have had to a major South American novelist. I distinctly hope there is more to come soon.