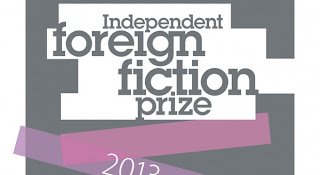 The WCN Book Club (which I ran until recently and now enjoy attending) was recently selected to shadow the Independent Foreign Fiction Prize 2013. This involved reading two of the six shortlisted books and attending a Readers' Day at the Free Word Centre in London. The offer, run by Booktrust and The Reading Agency, intends to encourage readers to think more consciously about what we read, and suport us in accessing works in translation that might otherwise not gain the readership they warrant.

The day was largely brilliant, and you can read reports from two other Norwich-based attendees here and here. Most exciting for me, was hearing the fantastic translator Ros Schwartz promoting Bibliodiversity - the idea that, as with environmental diversity, it is reading diversely that creates a healthy beneficial for all landscape. Excellent reading is about reading widely and without prejudice or borders, rather than the exact books you read. This is something I thoroughly agree with and am committed to bringing about. Hearing a writer I admire greatly advocating exactly the same thing, filled me with belief that we can bring it about. Keep watch for exciting developments over the coming months.

In the meantime, WCN Book Club was invited to read Bundu by Chris Barnard, and The Fall of the Stone City by Ismail Kadare, and I wanted to review them in comparison with each other for rarely have I read two such dissimilar books one after the other.

Bundu is the story of Brand de la Rey, an ecologist researching landscapes largely untouched by human habitation or intrusion. The Bundu is a landscape on the borders between South Africa and Mozambique. No-one knowss exactly where the boundary lies, it is a forgotten outpost populated with outsiders seaking solitude and independence, as well as a single Mission Hospital providing medicine to largely nomadic local populations. As drought starts to bite on the region, and people begin to flood south, the Mission hospital struggles to cope with the situation. With people dying all around, and baboons driven closer to human habitation for food and water, something urgent needs doinhg. Together with a volunteer named Julia, Brand sets upon a crazy idea that they might just be able to airlift the people to South Africa in a rusty old abandoned plane.

Bundu is classic frontier fiction where individuals do things for themselves, survive through innovation, adaptation, and refusal to accept defeat. Having read a great deal of South African fiction in the English language, it was fascinting to read something translated from the Afrikans, to get a slightly different perspective on the regions. In setting and characters, it reminded me of one of my favourite novels, Waiting for the Barbarians by JM Coetzee. Chris Barnard is a celebrated novelist and I enjoyed the opportunity to step into an earnest portrayal of the uneasy coexistance between humans and the landscape.

However, ultimately I found Bundu lacking in quality and possibly (given it was originally written 17 years ago) a bit dated. While the storyline keps me turning the pages and intrigued to discover what would happen, nothing about the characters, plot, or writing fully convinced. The romance between Brand and Julia is both undernourished and overdramatic at the same time, and despite the drought-ridden climate where people drop dead in their thousands, there is no real sense peril. One always knows that this is that sort of book where the author will never let anything truly bad happen to his characters. That they will get together in the end, and that things will work out fine for everyone.

It is not that I like to see terrible things happen to characters. But for fiction to work, I need to know that terrible things could happen. I need to believe in the danger and unpredictability of a fictional world. It needs to surprise me, just as the real world does. Unfortunately, Bundu didn't do that.  I enjoyed reading it well enough, but will not remember it very long and would not recommend it over many other, better, examples of this sort of book.

On the other hand, The Fall of the Stone City is the latest novel from the first MAN Booker International Prize winning author, Ismail Kadare. It is an allegorical novel, exploring the confusion of truth in a ideologically turmultuous time. Set in Kadare's home city of Gjirokaster in Albania, it begins with the Nazi invasion of Albania in 1943 and moving through to the death of Stalin a decade later.

The first few chapters feel like the witty, playful, fiction of Jose Saramago, particularly Seeing, which satarises politics and the way that ideas (both true and utterly fabricated) can catch on in much the way a virus does. I chuckled warmly as 'Big Dr Gurameto' and 'Little Dr Gurameto' tussled for supremacy in people's heart's and gossip about their feats wandered the streets. There was a clear and enjoyable metaphor at play, between the two Fascist states in Italy and Germany.

Unfortunately, as the book progresses, it becomes bogged down in more complex metaphors that confuse and often alienate the reader. These have an effective purpose in recreating the confusion of the move from Fascism during World War 2 to Soviet Communism post-war. The obsessions of the regimes, their battles with truth, history, and stories, and the need to exert control and a bunker mentaliy in order to secure state survival.

Having studied the period of Soviet history extenisvely, I found the book an effective satirical critique. However, while I intellectually appreciate all of this, I did not enjoy reading this book. The metaphors were effective, but felt overly oblique and boring. I struggled to want to pick up the book, and often found my eyes closing within minutes of doing so. This doesn't often happen to me, and both surprised and disappointed me, as I had been looking forward to The Fall of the Stone City.

One book enjoyable enough, but short on quality. Bundu succeeds on empathy, but not on intellectual satisfaction. The other full of quality but ultimately unenjoyable. The Fall of the Stone City is intellectually exciting, and at times full of wit and playfullness. But it suffers from not involving me emotionally at any point.

I'd struggle to recommend either to readers. But am looking forward to exploring Trieste by Dasa Drndic (which won the Readers' Choice award) and The Detour by Gerald Bakker (which won the full prize) to see how they compare. Shadowing the Independent Foreign Fiction Prize was a great experience, even if the two books I read failed to captivate.