Book Review: This Isn't The Sort Of Thing That Happens To Someone Like You by Jon McGregor 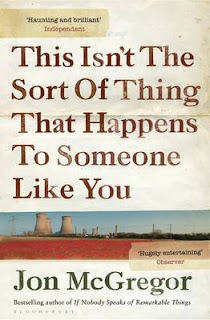 'You take a breath and swim, fiercely, lunging through the water, blinking against the salt sting, heaving for air, and there's a feeling running up and down the backs of your legs like muscles being stretched tight but you keep swimming because you'll be there soon, climbing out, pulling yourself back on to solid ground, and you keep swimming because there's a chance that the current has been pushing you away from the shore, and you keep swimming because this isn't the sort of thing that happens to someone like you, you're a good swimmer, you're young, and healthy, and the rocks aren't really all that far away and it shouldn't take long to get there and there isn't anything else you can do but now there's a pounding sensation in your head and a reddish blur in your eyes and a heavy pain in your chest as though the weight of all that water is pressing against your lungs and you can't take in enough air and so you stop again, for a moment, just to catch your breath.'
'We Wave And Call'

This Isn't The Sort Of Thing That Happens To Someone Like You could be the title of any of Jon McGregor's four published books. He's a writer interested in moments that change lives and the legacy of these upon his characters. His debut, If Nobody Speaks of Remarkable Things, took this concept literally, fusing narratives charting the effects of a single incident and using them to create tension as another narrative built to that crescendo moment. Even the Dogs - his Dublin IMPAC Prize winning novel about a group of drug addicts watching the final journey of one of their own - is all about the after-effects of these single moments. McGregor is a master of writing voice, particularly those of the dispossessed. He captures the humanity, the universal, without romanticising. His characters narrate with the hesitant, repetitive, circuitry, unfinished speech we all use. And his prose is vibrant, playful, energetic, and alive.

The things you don't see happening to someone like you begin with an older couple, arguing gently over the washing up. They aren't all dramatic. A man builds a tree house by the river, in preparation for a coming flood. A sugar beet crashes through the windscreen of a young woman. Fighter jets fly overhead as a war looms. Crime, political tensions, environmental Armageddon, accidents, stagnation in life.

They are all set in the vast flat landscapes of the Fen's, where sky and horizons blend and long flat roads stretch into the distance. Its farming landscape, traditionally mined in literature for themes of memory and forgetting. These are stories that explore the psychology of life in a flat reclaimed landscape, stolen from the sea, and where one of the things we don't see coming may just be its return to the sea. All the while, these places - Upwell, Irby in the Marsh, Messingham, Lincoln etc - feel as if they are being inscribed into stone against the forgetting of the future.

These stories are born of cycling the landscapes. Their settings correspond with their imaginings. The landscapes are both incidental and central to providing cohesion to the collection. These landscapes are perhaps best explored in 'In Winter the Sky' where a woman's poems about the colour and atmosphere of the sky are set alongside a story about burying the past in the soil, only for floodwaters to bring it back to the surface years later.

'People are not drawn here by the romantic sound of the place.
People don't much come here at all, and so the landscape
remains empty and
retains its beauty and

the beauty of this place is not in the names but the shapes
the flatness    /    hugeness    /    completeness of the landscape.
Only what is beneath the surface of the earth is hidden
(and sometimes not even that)
and everything else is made visible beneath the sky.'

One has a strange experience reading many of the stories here. McGregor experiments with different narrative styles - poetry alongside prose, stories told through a surveillance report or a redacted security document - and one goes into these with a slight sense of trepidation. Yet it is these stories that are some of the most rewarding. For they challenge ones sense of a story, of what a story is about, of why a story is told.

If there is a criticism, it is that there are perhaps a few too many stories here. The three experiments with form, the five or six most engaging stories - 'Wires' and 'If It Keeps On Raining', 'Which Reminded Her Later', 'We Wave and Call' - and a few of the shorter entries would have been more than enough. Between six and ten fewer stories would have made it one of the finest collections I have encountered.

Jon McGregor is my favourite contemporary British writer. It was delightful, therefore, to see this collection selected from a longlist of 116 books, to feature in the Summer Reads programme I run. Six great books selected by readers for readers. Books that inspire adventures and expand horizons. If you're looking for tried and tested books, these six come with a readers stamp of approval and a personal recommendation: we fell in love with these books and thought you might too.

www.summerreads.org.uk
For an extract from ‘Wires’ click here
For audio visual content of Jon McGregor reading and discussing his work, click here
And to see a fantastic event with Jon McGregor and Sarah Hall in Norwich in July, click here

Email ThisBlogThis!Share to TwitterShare to FacebookShare to Pinterest
Labels: Book Review, If It Keeps On Raining, Jon McGregor, Summer Reads 2013, This Isn't The Sort Of Thing That Happens To Someone Like You, We Wave and Call, Wires