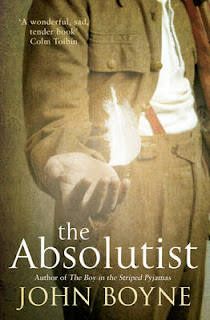 Looks fantastic - must take a look. I loved Boy in the Striped Pyjamas so looking forward to a book more aimed at adults which may be a little meatier.

There are points of similarity between The Boy in the Striped Pyjamas and The Absolutist, Louise. If you liked one, I think you'll like the other. It is certainly more meaty, though manages to remain a not too challenging read.