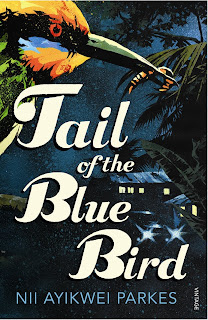 Kayo Odamtten is a young forensic pathologist working a dead-end job as a biochemical analyst in Accra. Educated in the UK, and with a few years working with the police in Birmingham under his belt, he is frustrated by the lack of opportunities in the force back home, by what he sees as their backward thinking and back-scratching ways. He has become Anglicised, perhaps without realising it, to such an extent that he still uses the name he adopted in England, Kayo, even now back amidst people who can pronounce his birth name. He is obsessive, convinced that science can solve every mystery, determined that no death will ever go unexplained in Ghana again. He is personally and professionally frustrated, an outsider at home.

When a pile of rotting remains, possibly human, is discovered in a hut in the small village of Sonokrom – population twelve families – deep in the Ghanaian hinterland, Kayo is dragged in to assist the police in their investigations. The ambitious and corrupt Inspector Donkor – whose idea of recruitment involves arresting and imprisoning him on conspiracy charges and persuading his employers to sever all ties – sends him off with the warning, “Don’t return until you have a good scientific theory and report – CSI-style.”

He does his best: taking samples for DNA testing, using blue merge goggles to spot patches of urine on the floor, creating a digital map of the crime scene on his laptop, typing and retyping his report. But there are mysteries here that science cannot explain: strange boys wandering in the forest, a flock of birds from far away, ghostly music in the night, strange curses as old as time itself.

Tail of the Blue Bird presents a familiar clash between the old and the new, between mythology and scientific rationalism, between tradition and the influx of modern ways of life.

Yet the manner of its telling is anything by archetypal.  Nii Ayikwei Parkes has utterly re-aligned the so-called ‘African novel’, discarding the post-colonial in preference of a more Ghana-centric approach. Its questing hero, Kayo, seeks not to explain Ghana to the outsider, but re-discover it for himself. He talks to the villagers, shows respect for their customs and hierarchy, shares palm wine in the local bar.  He may be detached, but is neither insensitive nor derisory, takes time to listen to the locals rather than seeking to impose science on the situation. And these specifics are representative of a wider paradigm shift. Ghanaian-English terms, spelt phonetically, are scattered liberally throughout the prose, without italics to differentiate or glossary to explain them. Indeed, it is English words such as cigarette and photo and Thursday that are italicised, reflecting the inherent focus of the novel.

Tail of the Blue Bird is a whodunit with a difference, focusing more on the ‘what’ than the ‘who’. It is short, perhaps too short, and the resolution is a little crammed into the end. But in Kayo it has an engaging character with a strong moral compass, and his journey towards re-discovering who he is reflective of an entire generation educated abroad who have to adapt to local facilities when they return. It would be easy to say that in doing so, Kayo discovers a higher truth, an appreciation of the world that science cannot understand. But that would be too glib. This isn’t a case of the traditional trumping the modern, or a romanticising of mythology as the embodiment of the Ghanaian people. It is about adaptation and re-appraisal. Each explanation, rather than explaining the other, only sheds more confusion on what may or may not have taken place. The boundaries between fact and fiction blur and in the end, Kayo has to accept that truth isn’t always the most important outcome.

In Tail of the Blue Bird Nii Ayikwei Parkes presents a fresh format for the ‘African’ novel and in doing so demonstrates just how western-centric our reading has become.