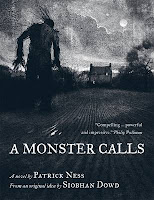 Conor blinked. Then blinked again. “You’re going to tell me stories?”
Indeed, the monster said
“Well-” Conor looked around in disbelief “How is that a nightmare?”
Stories are the wildest things of all, the monster rumbled. Stories chase and bite and hunt.
Conor O’Malley is a thirteen year old boy whose mother is dying of cancer. What’s worse, he knows it too. No matter how often she tells him that the medicines that make her throw-up and leave her too tired to get out of bed in the mornings will help her get better. No matter that no-one  will tell him what’s really happening. At school his classmates don’t know how to talk to him, and at night he’s wracked by a recurring and elemental nightmare.

Then, one night, a monster shows up. But its not the monster Conor has been dreaming of, this one is wild and ancient and wise. After what Conor has seen in his nightmare, he’s not afraid. But the monster wants to make a deal. It will tell Conor three stories and when they are done, Conor will tell his own story, the one of his nightmare, the one thing he can’t bare to face.
Written by Patrick Ness from the final idea of Carnegie Medal winning author Siobhan Dowd, who tragically died of cancer just as she was making a name for herself, A Monster Calls is a powerful and moving tale of finding ways of dealing with the impossible. Told in a untamed style and accompanied on nearly every page with dark and brooding black and white illustrations by Jim Kay, it is a rare and utterly extraordinary book. The style and ambiance is classic Ness. There are short sentences, unfinished thoughts, an omnipresent voice that cannot be ignored. The Monster, a Green Man like figure that emerges from a yew tree in Conor’s garden, offers wizened advice through a series of fairy-tale-esque stories that don’t turn out quite as we expect. That is the point. Patrick Ness understands and adeptly conveys the contradictions and moral ambiguities at the heart of being a human. The anger that burns in the middle of love, the fire of revenge sitting side-by-side with acceptance, the good intentions that turn out wrong. He’s a wonderfully humane writer, and this is perhaps the most coherent expression of the world view he presented in his multi-award winning Chaos Walking trilogy.
There is not always a good guy. Nor is there always a bad one. Most people are somewhere inbetween. 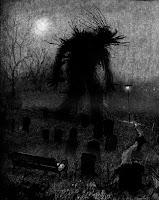 Yet for all the focus on stories, A Monster Calls is as much about the limits of what a story can do, as it’s power. “You do not write your life with words, the monster said. You write it with actions. What you think is not important. It is only important what you do.” There’s a focus on the catharsis of storytelling and writing, the forum they provide for learning about oneself and expressing and experiencing difficult emotions.
More than anything, and perhaps fitting for a book which claims that “you do not write your life with words”, A Monster Calls is an aesthetically beautiful book. For all Ness’s skill and the poignancy added by the background against which it was written, it is the illustrations by Jim Kay that steal the show. Produced with a variety of materials including beetles and breadboards, they are really rather scary and a perfect accompaniment to the novel. I’ve not seen illustrations as exceptional as these in a long time. They are right up there with the most stunning works of art one finds in children’s literature, comparable in every way and often surpassing those of Brian Selznik in The Invention of Hugo Cabret, or Shaun Tan. To hold A Monster Calls in one’s hands and flick through the fifteen or so double page illustrations is to see what good illustration can bring to a book.

A Monster Calls provides an engaging and moving exploration of the grief that comes while waiting for a loved one to die, and the complex emotions that precipitates. Conor is a likable character one cannot help feeling deserves more than life is giving him, but through the Monster’s stories, we come to see that not everyone gets what they deserve in life, and often the hardest thing of all is to determine what one person actually deserves. This is a modern day fable on dealing with whatever life throws at you, which argues that you can be forgiven for feeling even the most horrible things, so long as you are true to yourself, and realise from where these emotions spring.
Published by Walker Books, 2011, HB, ISBN: 9781406311525, 216pp

Gardener in the Distance said...

Great review of what sounds like a great book. Every so often you find one like this, a story like stories have always been told, out of a deep necessity, not out of a marketing plan...

Thanks Gardener in the Distance; it is very nice when stories are written out of deep necessity. In fact, I think that they generally are. To me, marketers are more to blame for a uniformity in how books are presented, rather than a uniformity in style. I've never met an author who didn't believe absolutely in the necessity of their work

This book sounds so good! I'm adding it to my list.

Hope you enjoy it, Jen. Let me know when you've read it.