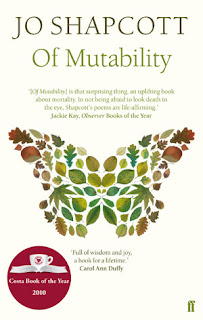 Too many of the best cells in my body
are itching, feeling jagged, turning raw
in this spring chill. It’s two thousand and four
and I don’t know a soul who doesn’t feel small
among the numbers. Razor small.
‘Of Mutability’

In her essay ‘On Being Ill,’ Virginia Wolf describes the effect that being ill has on one’s perceptions. She talks about the ‘horizontal view of the world’ that comes from spending so much time on your back, the different ways of seeing that it inspires, and the way it opens up the sky.

In 2003, Jo Shapcott was diagnosed with breast cancer. Seven years later, the cancer beaten, she published Of Mutability. Although not specifically about her battle with illness – cancer is never mentioned for instance – that experience of ill health and the different ways of seeing it enabled, provides the topography upon which the collection is built. As the title suggests, these are poems about transformation, mutation, mutability, in the body and the world around it. Shapcott presents this mutation as sometimes liberating, sometimes destructive, full of possibilities and yet ultimately a symbol of just one terrifying inevitability. There are shifting territories and permeable boundaries, where pavements ripple beneath feet and fingerprints dent hillsides.

Of Mutability loosely follows a narrative arc from diagnosis through all sorts of mutations towards a resolution and all-clear. There are also nods to the artwork of Helen Chadwick, which two of the poems respond directly to, and Percy Shelley’s ‘Mutability’ with its clarion call: ‘Nought may endure but Mutability.’

That is certainly the feeling here. Mutability is the single consistency around which uncertainty orbits and transience passes. The first mutation, that of cells that leads to a diagnosis and the title poem is wild and unbounded. The year is 2004 and the world is tearing itself to shreds through war and climate change, leaving the narrator feeling ‘razor small’, everyone in skins they feel uncomfortable within. In ‘Era’ the reader is placed into a dangerous world where magpies squabble, fountains splash ‘chemical bubbles’ and traffic swarms ‘round Vauxhall Cross, like crazy fish, with teeth’. Later in St Bride’s we have an even clearer vision of war, where internal transformation and external conflict mirror each other, leaving ‘the smell of print and ashes in my nose.’ In ‘Night Flight to Muncaster’ the reader is transformed into an owl, flying free over the landscape and taking a trip to the seaside. But it ends on a sour note, as the owl’s senses enable it to hear things other can’t: ‘You can hear clouds creak, droplets hiss’.

This is an unhappy world being transformed against its will. Much later, in ‘Viral Landscape’, and ‘I Go Inside A Tree’, the mutated internal and external landscapes come together, permeable, liminal. And yet, around this, there is a calmer, sensual, more mystical view of mutability taking place. In ‘The Oval Pool’ a woman turns to water, and watches the pain of those around her. Yet she remains defiant: ‘there will be no evaporation.’ In ‘Abishag’ a couple seeks to mutate together so that they are sponged down as one, the borders between them vanishing as she licks the sweat from his skull and feels ‘his mind through my tongue’.

There is humour, too, a black humour in some, but genuine humour elsewhere. In ‘Hairless’, Shapcott questions whether physical transformation changes who and what you are, the poem starting with the line ‘Can the bald lie?’ and ending with a roar against the dying of the light. In ‘The Deaths’ she imagines walking with death like ‘two drunkards’ before she implodes ‘like a ripe mango’. One of the most enjoyable poems is ‘Somewhat Unravelled’, an imagined conversation between Shapcott and her auntie whose experience of the world has similarly been transformed by dementia. Their intimate words fill spaces, their promises of straight talk and ‘a meal so wholesome and blimmin’/pungent with garlic you will dance on it and/eat it through your feet’ a guard against further mutation.

There are series of poems that mythologise mutability, others that map the gradients of permeability and a series that reflects upon trees, those bastions of strength that yet ‘respond to everything, everything else’ just as everyone does.

Towards the end, the register again changes, uncertainty, hope, gratitude creeping in until, in ‘Procedure’, all the worries literally go up in the steam of a cup of tea, the narrator putting all the ‘blood tests, and cellular madness’ behind her and saying ‘thank you thank you thank you for the then, and now’.

Yet, ever playful, Shapcott ends on a different note, a postscript to the mutations. In ‘Piss Flower’, one of two direct responses to individual pieces of Helen Chadwick’s art, we finally see a limit to mutability. Now all clear, Shapcott is no longer so mutable, she become a man and produces ‘a golden parabola’, but she can do tricks of her own, in her own body and without any transformation. Perhaps other things may endure beside Shelley’s mutability.

The theme of mutability is so ubiquitous that it can even be applied to the structure of the poems themselves. Almost all start as one thing before transforming before your eyes, their implications shifting with one surprising line or dissonant ending.

In June 2012, Jo Shapcott spoke in Norwich and referred to life as ‘vertiginous, multi-layered joy’. That seems to me a perfect description of Of Mutability. But these layers are not separate, they leach into each other, they mutate, they contain within them near limitless possibilities. Of Mutability is a collection that looks mortality bullet-straight in the iris, but does so without fixating upon it. It is self-knowing and vulnerable. These poems are highly intelligent and yet entirely unpretentious, each word carefully weighted yet retaining an accessible clarity. The collection is playful, frequently humorous, and quietly powerful. It rewards multiple readings and careful consideration but has a visceral power that captures you immediately and doesn’t let go until the last word.

Ultimately Of Mutability is a book about the euphoria of survival. The notion of Per ardua ad astra – ‘through adversity to the stars’ – runs throughout this collection, an open mouthed appreciation of the spectacle of life, even when mired in earthly troubles.

Of Mutability is one of five books featured in the Writers' Centre Norwich Summer Reads programme. For more information and resources that include an extract, video content, and links to other reviews, see www.summerreads.org.uk