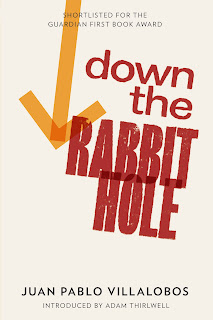 ‘I love three-cornered hats, because they’re mad soldiers hats. You put one on and you feel like running off all on your own to invade the nearest kingdom.’

Down the Rabbit Hole is a masterpiece unlike anything I have ever read. Like a world-class soufflé it is subtle, complex and challenging in its depth of flavour yet light and airy in the mouth. At sixty-eight pages, it is barely a novella, and yet it is hard to believe more could be packed into those few pages. I’ve laughed uncontrollably each time I’ve read it. Wit oozes from every sentence. And yet the comedy is blacker than night; for all the charm this is also a disquieting and tragic picture of life and a biting satire that turns many of the giggles to ash in your mouth.

Tochtli – our narrator, his name means ‘rabbit’ in Nahuatl, Mexico’s main indigenous language - is a young boy growing up with his drug baron father in their palatial Mexican compound. He loves hats, is fascinated with samurais, guillotines and the French Revolution, and what he most dreams of is a Liberian Pygmy Hippopotamus to add to his menagerie of wild animals. He’s as precocious as he is unworldly. Each night before he goes to bed he reads the dictionary and learns difficult words. Some of his favourites are sordid, disastrous, immaculate, pathetic, devastating and enigmatic; they form the lexicon with which he understands his life and horizons and the basis of his narration.

The problem for Tochtli is that his horizons are disastrously limited. His father, Yolcaut, is as paranoid and protective towards Tochtli as he is devastating to his enemies. Tochtli is not allowed to leave the palace, has no-one his own age to play with, and knows only thirteen or fourteen people in total. He’s not sure which it is because sometimes he can’t be sure whether people he knows are still alive or not, Add in the dead and he’d know more people,
‘Seventeen or more. Twenty easily. But dead people don’t count, because the dead aren’t people, they’re corpses.’

Yolcaut’s gang is the most macho for at least eight kilometres. They bribe, they traffic drugs, they have rooms packed with guns and they feed their victims to the tigers. Anything might happen and anything goes. Down the Rabbit Hole is a fantastical world, a nightmarish inversion of Alice in Wonderland that oscillates between realism and surrealism and by presenting such polar opposites manages to achieve both simultaneously. The genius lies in the way in which it is narrated. Imagine a more completely realised version of the child narrator of Room – or Alice herself – telling a narcoliteratura tale of guns and gangs and drugs and girls and you have an idea of what it is like. Adam Thirlwell describes it in his introduction as ‘a deliberate, wild attack on the conventions of literature.’  But where some experiments with form and perspective could feel academic or cold, this is as warm and engaging as one could hope for.

Tochtli is delightful. He has a pure visceral enthusiasm for life and knowledge and he recounts what he sees with macabre matter-of-fact vibrancy, without commentating on what he sees. It is his incomplete understanding of the world around him that injects the humour and pathos into what takes place. He sees things in black and white and by responding to them in a logical way, looks beyond nuance to see the bigger picture somehow more clearly. Because he is such a floored narrator the reader is encouraged to look beyond, to interpret and read between the lines of his sordid tale. What one finds there can make for uncomfortable reading.

With Yolcaut he plays a game where:
‘one person says a number of bullets in a part of the body and the other one answers: alive, corpse, or too early to tell.‘One bullet in the heart.’‘Corpse.’‘Thirty bullets in the little toenail of the left foot.’ 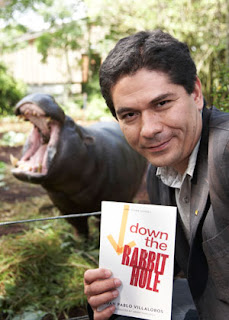 Poor Tochtli wants to be macho like the rest of the gang (the only other option in his understanding is to be a faggot) and he makes a pretty good effort at it. His view of the world can often be shocking and alarming. But he can’t be as macho as he wants to be. He’s vulnerable, pathetic even, and without any power over his life or surroundings. He suffers crippling psycho-somatic stomach aches because he is allowed to cry when he’s ill without being called a faggot. At one point he becomes mute in effort to control his little world. In Transactional Analysis terms, he is a textbook case of an Adapted Child, and Yolcaut an adult incapable of being a parent. It’s a disastrous cycle of violence begetting violence, emotional damage begetting emotional damage. As Tochtli says in the opening pages, ‘I think at the moment my life is a little bit sordid. Or pathetic.’ Later he goes even further, describing himself as ‘the most pathetic person in the whole universe’. The tragedy of the book is that he is, unfortunately, for once correct.

And all the while nagging themes of imperialism and failed democracy play out in the background. Villalobos has said that he wanted to write a book without moralisations about a subject that has been moralised too much. He achieves that and so much more. His exceptional control over Tochtli’s narration – he only ever mentions that which is of interest to him, no extra world-building, no wider context or history; hence the novels short length – create a claustrophobic, intense novella and he writes from a child’s perspective amazingly well. Added to this Rosalind Harvey’s adroit and inspired translation and you have a novel that refracts major social issues through the eyes of a young boy, creating a strange, momentous, crazy hybrid that delights and rewards on every page. In Tochtli’s words, Down the Rabbit Hole is an immaculate, enigmatic, and devastating book.


Down the Rabbit Hole (ISBN: 9781908276001) was published in 2011 by And Other Stories, a wonderful new publisher set-up on exciting and idealistic principles. They operate on an ethical, not-for-profit basis, decide what to publish based on feedback from readers, and believe that great new books will be heard about and read thanks to the combined intelligence of people. They publish four books a year, and subscribers receive numbered first editions and a thanks in the back of each book.
To find out more about And Other Stories, or to subscribe, see www.andotherstories.org