Book Review: All That I Am by Anna Funder 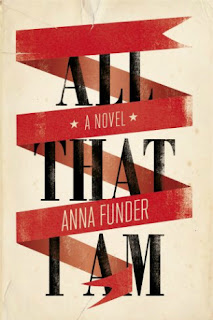 “When Hitler came to power I was in the bath. The wireless in the living room was turned up loud so Hans could hear it in the kitchen, but all that drifted down to me were waves of happy cheering, like a football match. It was Monday afternoon.”

All That I Am opens with history on a knife edge. The Golden Era of the Weimar Republic – artistic, progressive, intellectual, experimental, permissive, excessive, - is passing and a new one of extremes about to dawn. So well trodden is this history that we think we know what will follow, but one of the outstanding things about Anna Funder’s debut novel is that it reveals a side to the history hitherto largely uncovered: the early years of the Nazi’s terror, the persecution and expulsion of political opposition, the extent to which other countries were desperate not to antagonise Hitler, the long arm of the Gestapo reaching out further than anyone dared believe. As she did in Stasiland – a reportage collection of personal stories from behind the Berlin Wall that won the Samuel Johnson Prize for non-fiction – Funder casts a fresh and vibrant eye on forgotten stories. All That I Am is another marvellous book.
The characters here belong to that Weimar generation: they are the World War One survivors who vowed that war could never be allowed to happen again, the political reformers who saw progressive social democracy as the antidote to imperialist conflict, the artists and journalists who captured the atmosphere of the 1920, the teenagers inspired by the language of the future.

All That I Am is narrated alternately by celebrated German playwright Ernst Toller in New York in 1939 as he seeks to re-write his memoirs, and an elderly Ruth Wesemann in 2001, who receives the recently rediscovered memoirs in the post. Reading these memoirs unlocks her memory and events come flooding back and soon overtake her. Between them, Ruth and Toller bring the unremembered – Hans Wesemann, Dora Fabian, Berthold Jacob, Mathilde Wurm (all whom existed though are here sometimes linked in ways they were not in life) – back to life. Their story is of bravery and conviction in the face of history, of desperate opposition to the reprisals that followed the Reichstag Fire and subsequent exile in London. There, powerless and with threats against their lives growing and the UK government turning a blind eye, they continue to struggle, desperate to warn the world against what is happening before it is too late. 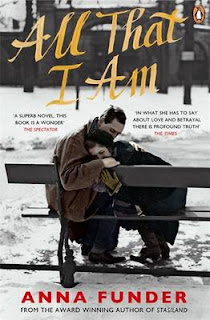 The extent of Funder’s archival research is impressive, and her decision to novelise the events a wise one. It allows her to marry the personal stories of her characters with a broad brush stroke approach to history. Fact, interpretation and biography form the framework for All That I Am, but it is the fiction that makes it a great book. Funder imagines the characters back to life in vivid detail; readers will be quickly engrossed in their milieu, standing alongside them in terrified defiance.


This is white-knuckle storytelling. Through the personal narratives, Funder explores the experiences of the characters, the driving forces behind why and how people are able to be brave, and the results of that bravery on their lives and those around them. She adeptly explores the paradoxical mix of fragility and strength that can sometimes be the make-up of great people.

This is particularly the case with the heroine, Dora Fabian, a ‘sort of German de Beauvior: less sex, but more political”. She is driven by conviction in her cause, self-sufficient and no-nonsense. Ruth and Toller are each enthralled by her – ‘We were the two for whom she was the sun. We moved in her orbit and the force of her kept us going.’ – and so is Anna Funder. In an interview with The Scotsman, she describes the experience of coming across Dora’s story as leaving her ‘thunderstruck and irrational and besotted and intrigued.’ She is a compelling character and it is apparent that, for Funder as well as her characters, this book is a act of love, of recording her courage and self-sacrifice, celebrating and remembering her life.

The same desire to resurrect and testify to those past is apparent in the character of Ruth, whom Funder met in Ruth’s later years, and whose stories first turned her on to the possibility of this book. Ruth is the compassionate core of the novel, an unobtrusive observer of those around her. This personal sympathy could easily turn All That I Am into sycophantic fiction of the worst kind, but Funder impressively maintains a rounded warts-and-all view of her characters. Compassion is a constant theme and one feels that it is the challenge of doing justice to these figures that drove her to write. ‘Imagining the life of another is an act of compassion as holy as any’, says Ruth at one stage, ‘once you have imagined such suffering, how can you still do nothing?’

By presenting humanised stories, and enabling readers to experience these vicariously through the characters, fiction has amazing power to change our understanding of the world and compassion for others one person at a time. Funder and I appear to share this idealistic conviction. All That I Am is an exercise in proving the validity of this conviction. But more than this, it is a wonderful read.


The plot starts slowly, with more set-up than feels necessary, but builds and once the characters come into their own it swiftly becomes an involving, compassionate and wonderful novel of love, friendship, courage, espionage, and betrayal. It is both a page-turning thriller and a considered investigation of courage and conviction. The characters are tested at every step, and they respond in varying ways. Some turn, some break, none is perfect. In the end, as Wystan Auden notes to Toller: ‘All that we are not stares back at all that we are.’


All That I Am is one of five Summer Reads, presented by Writers' Centre Norwich. For more information, see www.summerreads.org.uk