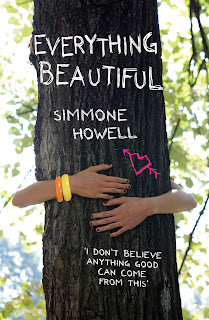 Everything Beautiful in one Tweet-sixzed chunk:
Slightly illicit and thoroughly escapist, Everything Beautiful is a journey is self discovery for teens everywhere.
I believe in Chloe and chocolate.
I believe the best part is always before.
I believe that most girls are shifty and most guys are dumb.
I believe the more you spill, the less you are.
I don’t believe in life after death or diuretics or happy endings.
I don’t believe anything good will come of this.
Belief and scepticism of all sorts are at play in Simmone Howell’s warm and edgy coming-of-age novel Everything Beautiful. At times outrageous, always funny, and emotionally involving, it is a great young adult read, perfect (I assume having never been one) for teen girls everywhere. There is plenty of outlandish, risqué behaviour – including foul language, sex, drugs, and all sorts of rebellion – yet this is encapsulated within a plot that is trustworthy and empowering, that promotes self-worth and respect for others above all else. Reading Everything Beautiful is a little chance to walk on the wild side without ever having to leave the safety of your own bed.

Riley Rose is sixteen-years-old and determined to be the bad girl. She’s still mourning the death of her mother two years earlier and it doesn’t help that her father has got himself a new girlfriend, a born again Christian named Norma who seems intent on being Riley’s best friend. It’s all left Riley rudderless and out of control, experimenting with sex and drugs and alcohol in an effort to find the love and comfort that’s missing from the rest of her life. Now Norma has tricked her father into sending Riley to Spirit Ranch, a Christian holiday camp in the middle of nowhere in the hope that the team-building exercises and wholesome company will cure her wayward ways.

But Riley has other ideas. She’d much rather be back home, preparing for Ben Sebatini’s big party with her best friend Chloe. If she has to go to Christian camp, she’s going to “go as a plague.”

Within hours of arriving, she’s ensured that all the other campers know who she is, and that most hate her. She is a big boisterous girl, sassy and quick to air her opinions. She’s rude, rebellious, and obnoxious, particularly when it comes to religion. Yet she’s also fragile and easy to identify with. And as she gets to know her fellow campers, she discovers that they are all as lost as she is. There’s the lovely over-protected Sarita, conceited beauty and love-rival Fleur, siblings Bird and Olivia who, like Riley, don’t quite fit in. And then there’s the newly paraplegic Dylan Luck, in who she finds an equally angry co-conspirator and, ultimately, an unexpected friend. Together, they turn the camp upside down and no-one emerges quite the same.

Everything Beautiful is a book about self-discovery and self-expression. Riley is a wonderful, unusual, heroine. She’s entertaining when she’s angry, prone to insensitive outbursts which one cannot help but smile along with. She’s capable and resourceful, a generous and thoughtful friend when she wants to be and a bit of a bitch when she doesn’t. She’s unashamed of her weight, a plus size role-model who doesn’t feel sorry for herself and we don’t need to pity. Above all she’s thoroughly human. Even when she plays sport, and struggles with her bouncing flesh, we do not take it as an author prosthelytizing about the need to be a healthy weight. It’s presented as just another part of Riley’s experience of life. Indeed, one of the most appealing aspects of Everything Beautiful is that it doesn’t lecture or present an agenda in anything. The sex isn’t there to be cautionary, the scrapes Riley gets herself in are nothing more than the scrapes of a teenage character trying to find herself and her place in the world.

Similarly, although structured around the Biblical tale of creation – On the first day… etc – religion is a fairly insignificant backdrop. Riley’s emotional journey is one of spiritual discovery, but this is in its widest sense, in finding balance between rebellion and conformity, self-affirmation and self-destruction, what you believe, and what you don’t. Indeed, Riley intersperses her rebellion with reading Thomas More’s Utopia, and it is in this that she finds new acceptance of the mixed-up world she finds herself in.

Everything Beautiful is not the genre of novel I usually read but I thoroughly enjoyed it nonetheless. It’s good, slightly illicit and thoroughly escapist fiction. It’s impossible not to come away from Everything Beautiful wishing you could spend a week experiencing life in all its many forms in such an immediate and desperate way as Riley and the others do at Spirit Ranch, or feeling that the world makes a little more sense. And this transformation, this coming-of-age, is reflected in a new manifesto, one which is a lot less strident than it’s predecessor.

I believe in Chloe and friendship and love now.
I will always think of Dylan when I hear the Boobook owl.
I believe most girls are insecure and most guys are bluffing.
I believe the more you spill, the messier you get.
I don’t believe in miracles but I do believe in spirits.
I believe there are more questions than answers.
I believe the best part is still to come.
(I still believe in chocolate!)
Bloomsbury, January 2009, 9780747597858, pp278